Where had my time Machine taken me this time?

It had better be good because it took me a whole 30 seconds to get here!

At first I was oblivious of my surroundings, but then I saw the Diplodocus and knew I was in the USA in the Late Jurassic period. They were collectively moving East, munching on leaves as they passed. (In order to survive, a Diplodocus must eat a mass of vegetation – about 30kg each day.) I tried not to disturb these gentle giants by going to hide behind a tree, which still offered me a great view of the occupied clearing.

In doing so, I clumsily stumbled into an Allosaurus nest filled with eggs.

I was in trouble I just knew it!

A mother never goes far from her nest and if she found me it would be all over.

Panicking, I ran for my life but the Allosaurus had seen me and was running too!

Fear blocked and cancelled my senses so I ran straight into the herd of Diplodocus. Diplodocus scattered in all directions but to my utter delight, the protective mother returned in the direction she had come, to see her eggs.

All of a sudden, I felt like an ant, with 27 metre tall dinosaurs slowly plucking leaves off trees at the extent of their abnormally long necks. They towered like sky scrapers and were the longest, most cumbersome creatures I had ever come across. Small, sharp spines lined their back, tail and neck in a single line and their teeth looked like an oversized comb. When a Diplodocus placed a foot on the ground the ground shook a little and dust followed the monumental monsters.

A deafening call greeted my ears but it sounded friendly and welcoming. I liked it here but it was time to head back. I said a final goodbye to the dinosaurs – steering well clear of the Allosaurus nest – and returned to 2020.

This creature is 3 meters tall (300 centimetres) and 2 meters wide (200 centimetres), with its flame  feathers it can spark up anything it touches. Going 74,000 mph it can swoop up anything because of its strong claws and its strength even the most skilled land animal can’t escape the Phoenix.

The Phoenix never really was a target because back attacks and ballistic stares never affected them. If the Phoenix were to get into a fight they would both Perish because their only weakness was their families, if another animal decided to pick a fight with a Phoenix family The male would fight until he died or the other animal and sometimes they would both die.

The phoenix’s fossils would be found Cretaceous sediment in Kyzylorda and southern Kazakhstan. Because of its sunny location phoenix were able to thrive.

My Dinosaur Encounter by Oliver Snook

I was slightly shaken up and disorientated when I stepped out.  It took a while to work out how far back in time I had come!  I looked around and could see what looked like part of the film Jurassic Park!   It must be the dinosaur ages.

Wait - was that what I thought it was plodding slowly through the thick forested plains. I had always liked the idea of having a close encounter with a triceratops but I quickly changed my mind I was petrified. I stopped in my tracks then our eyes met.  It felt like I was staring at two basketballs his eyes were so huge. Then I heard his feet scraping along the ground it was really loud like a truck on the motorway. At last it stopped and I gently approached the mighty creature. As I got closer up I could see properly what it was - a triceratops with a one metre long frill and two huge horns.  I didn’t know whether to turn around and run away or stare in awe of what was in front of me!

It was deadly looking but luckily, well I hoped, it was not after me, it was after vegetation and he would use his horns for protecting himself.  It was about two metres tall but much longer in width with its huge horns. My body trembled it was really amazing seeing one but not that amazing knowing that it could kill me. So I knew I had to keep my distance from the triceratops.  It was incredible though, an amazing face which kind of looked like a parrot! I had never believed that until I got an actual close up of it with its mouth that looked like an extra large parrot beak.

It made a deafening roaring sound, I began to wonder if I was here for good now.  It didn’t move much, a bit like a statue at the a museum – or at least I didn’t think it was moving, until…I’m sure I could see his frill twitch from side to side. Did this mean it was time for me to head back, very quickly, or should I wait to see what he would do next? Luckily for me it must have been just an itch.

I decided my time here was up, it was great to see you triceratops but I must go. 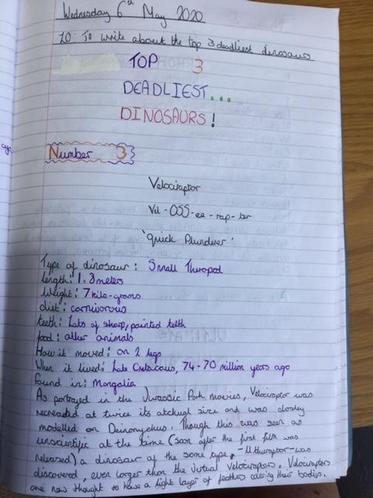 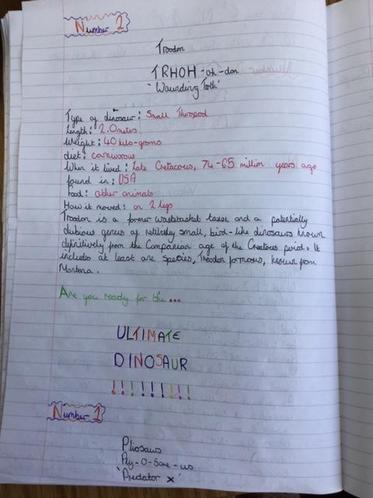 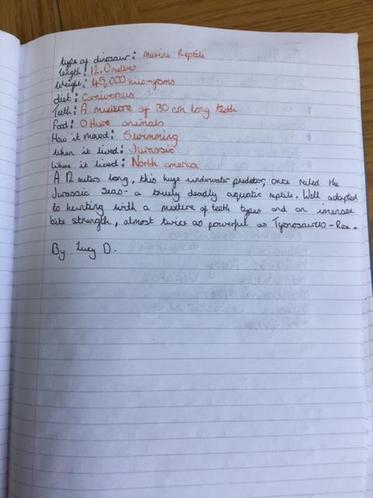 There I was millions of years back in time, standing foot to foot with the dinosaurs - how incredible is that?   I had just passed a Triceratops what a beautiful creature.   I was lucky that huge creature was not a meat eater or I would be gone.   This experience was too good to be true.   When it passed, the floor shook a little but of course it would, you should have seen the size of it, gosh!

I hid in the bush because I had to get out of the path of the t-rex a meat-eating animal!!! STOMP STOMP! He went shaking me about like jelly. I have to tell you something, I had never been as scared as I was being passed by a t-rex.

Above me flying high in the sky was a Pterosaurs a huge bird-like animal with a long beak and tremendously long wings, but weirdly with no feathers.   This creature was probably one of the strangest animals I saw that day.   You’re probably thinking he is probably the size of an eagle.   NO, this animal was the size of a school bus!!!   That’s one big bird. 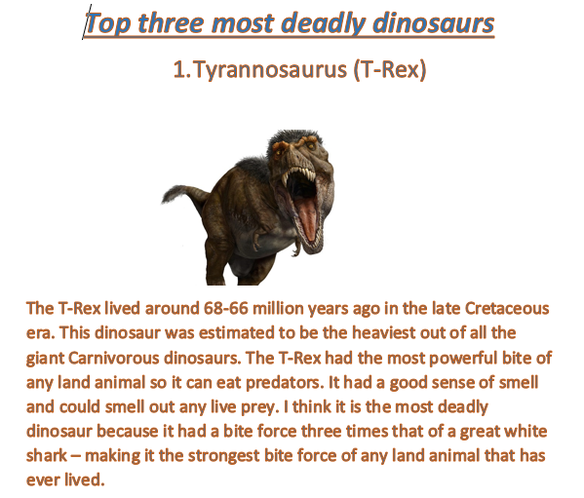 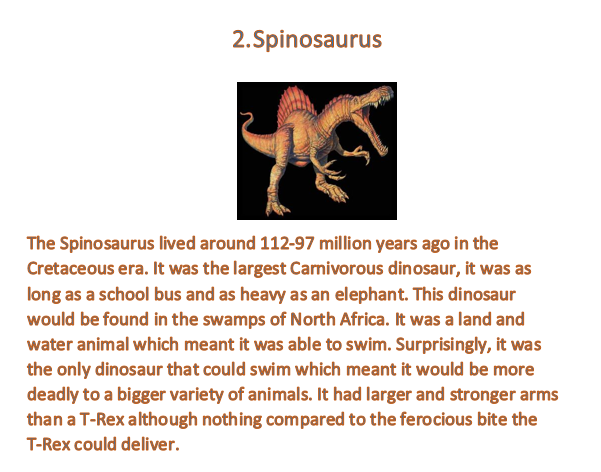 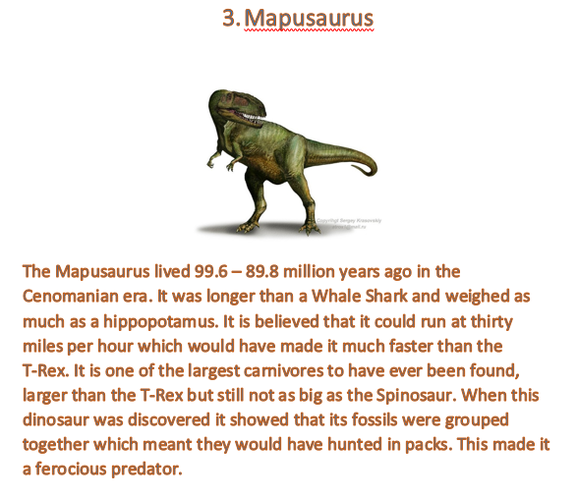 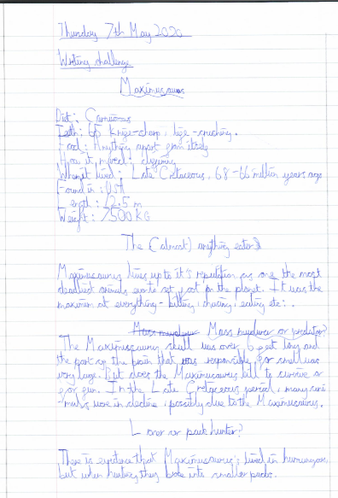 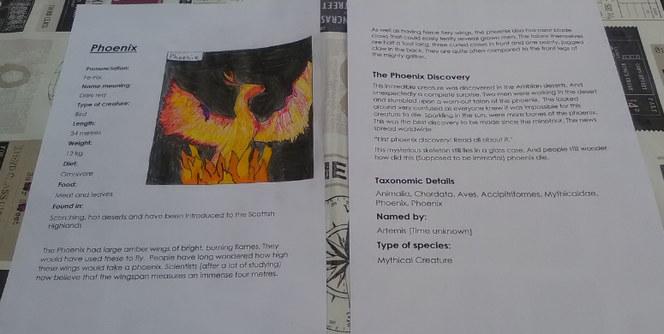