The children were asked to imagine what was inside the boat house and describe the setting in 100 words.

It was dark and gloomy as I walked into the shabby room. I felt myself becoming anxious and my breathing sped up. It was very claustrophobic inside with little space around me. Books and old boxes were stacked up high to the ceiling. I struggled to walk down the narrow walkway. At one end of the room was a tiny bed covered with filthy sheets. The pungent air filled my nostrils. At the other end was a small stove and sink and a couple of chairs. Dirty plates were left festering. My clothes stuck to my chest from the heat.

Inside the old barge, which was stranded on the bank, a tatty old old chair stood in the corner.in front of the chair lay a thread bare rug which was covering the dried, cracked floor boards. The holes in the roof made the wind whistle through so it felt like a cold mid winters day. In the centre of the barge a wood burner glowed red hot. The burner released smoke that clogged up your nose. On the wall hung hardly standing shelves with chipped plates, battered old pots and tins of food. 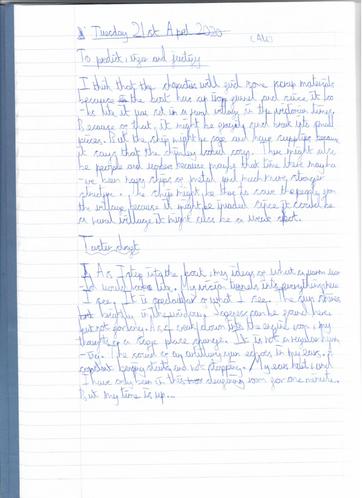 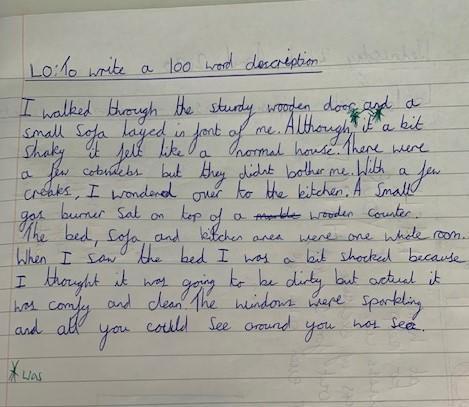 As I stepped into the rickety wooden barge I tripped over a misplaced plank of wood that was falling apart. To my left I saw a shabby looking table which was held up by only three table legs. In the far corner, which wasn’t very far away from the table, was a faded, moth-eaten sofa. All around me was a smell of burning coal from the fire place. Dangling from the ceiling there was a lantern which surprisingly lit the place up quite well. I could hear the sound of rats scurrying above my head and making the floorboards creak.

As you wonder inside the old forgotten boat you feel as if you are being sucked into the past. Old dusty furniture, sticks and branches constantly in your side. The walls look like they have been rotting for years, the ceilings have been dampened for decades.

All of the floor was dusty, rusty and creaky so walking wasn't sneaky. The smell was awful! Old and musty but in a way it seemed homely. You felt safe and protected even if it looks disgusting. The air got more foggy as you walked through the home inside the boat.

As I was lifted through the old, oak door, I was greeted with the most repugnant of smells. It smelt like a fat man had died in there and all his insides and all the things that he had eaten had been rotting, left undisturbed. To rot. The air was frowsty, and all the furniture was covered in nasty stains. The furnace looked as if it were shoved into this ship with carelessness. The furnace was left on when we got there. Smoke was emitting from the thing, so the chimney was about as useful as a flea holding the fattest man in the world. In other words, useless. Only very little bursts of smoke came out from the rust chimney. My dad lowered me from his shoulders. The floors creaked below my feet. There were stains which when you stepped on them, they would stick to your feet, refusing to let go. There was a bed at the far end of the boat. It was filthy. The sheets were covered in grease and mud. The tabletop next to it was covered in cobwebs and had a cup of half-finished orange juice which was developing mould all over. The worst feature of this ship was probably the sink. The dishes piled up, covered in splotches and mould and rancid kitchen water. It was like a game of Jenga. The plates are the blocks and if you make one false move, you are going to end up in indescribable pain if they fall on you. Well, that and the revolting stuff on the plates which you will end up using the rest of your life trying to wash off.

Smoke stung my eyes as I neared the cottage. It was untidy with rubbish on the floor but felt surprisingly welcoming. A small vegetable patch sat, needing a harvest, and the roof was old and rundown. I opened the door and let myself inside, placing my bags on the armchair in the corner.  The fire was warm and just cancelled out the evil draughts coming from the roof. A bed was lying  underneath a dirty sheet and clutter consisting,of pots, cans and scraps of paper, littered the floor; I had to be careful where to place my feet.

As we walked towards the door an unpleasant stench hit our nostrils. Where was it coming from? When we opened the door or a huge mess was all I could see. Furniture on its side and an inch of dust everywhere and much all over the floor. It felt like a whirlwind as the waves crashed and all I could see was a mess storm. It even took me a few minutes to actually process that I was going to live here for the rest of my childhood.

We wondered about the houseboat as things just kept getting worse. A two person bed sat in the corner of the room it was covered in staines. I think it may have been used as a towel more than a bed sheet. I gazed around the room disgusted by what I saw. I guess I have to put up with it as this is my home now I couldn't go back to my house where there is war and anger but I had my family and that's all that mattered.

I trudged across the sand, until I reached the boat.It had seaweed crawling up the outside and it gave off a salty smell. It had a makeshift straw roof . The door was hanging off its hinges which were smothered in grime. It creaked as I walked inside. There was one small light, that swung too and fro, slightly lighting the dull cramped room. I struggled walking down a passage made narrow by a small wood burner, that spluttered out ash. On the other side were fishing rods and crab pots. Mould had made its way across the tiny kitchen and filthy plates were stacked in the sink.

The boat house was strange- there was only one room with all the things a normal house would have. On the far left was a small, short bed with an itchy pillow and thin scratchy blanket that would make you tingle all over. In the centre was a warm fireplace with lots of twigs inside, and a tube leading to the chimney where all the grey, cloudy smoke came out. Surrounding the warm fireplace was two chairs and a coffee table. Finally in the right corner was a  basin which was small and big enough to fit a plate inside. This tiny basin was full of brown dirty water with thick blobs of mud inside.

I walked into the little house boat, it was dimly lit although the flickering stove in the corner of the little room caught my eye. It was burning rapidly through the wood and the homely smell filled the room. Even though the glass on the front of the stove was covered in ash, the fire was still clear to see.

The windows were small so not much light came in. On the wall, hung crooked picture frames, covered in dust. There was a little bed in the corner of the room with an old, tatty sheet. In the middle of the room there was a wooden round table with two small stools.

Although it was a boat, it felt like a home.

Glancing around, I stepped into the barge. Who knew people could live on boats! The wood burner caught my eye first. Crackling flames were locked inside it. Thick grey smoke filled my lungs as I took in a deep breath. Nearby there was a small quilted sofa covered in what looked like handmade cushions. In the middle of the boat there was a round, wooden table set with shiny forks, sharp knives and spotless cream plates. Then I saw two beds. One neat and perfectly made, whilst the other was the complete opposite, with a duvet creased and crumpled in a pile at the end of the bed.

As we walked into the dingy house-barge, I realised that we did not know who lived there. I would have liked to know because it looked like some old hags’ residence. A  small bed was sitting in the corner with a wardrobe opposite. The large chimney was being fuelled by a huge hob that was puffing and huffing like a large dragon. In fact, it was so bad a light smog had filled the room,permanently blocking out the light. In the middle of the hut-houseboat was a large table with 6 places. The sight was the most peculiar thing I had seen all day.

The pictures match my predictions in some ways, like it being like a normal house, with a bed and a table, but my layout was much different so in ways they were different.
The atmosphere in the houseboat could be described as downtrodden, beaten, or murky.
I would expect maybe a sort of voodoo soothsayer who ‘tells the future’. It could be home to some very shady characters like robbers, thugs, and muggers. I expect these types of people to live there as to me it gives off a certain vibe that suggests that you might not want to meet who lives there as they could be unpleasant (like the house). On the contrary, it could be like an old Victorian houseboat and be home to some very poor but nice people living in squalor conditions.